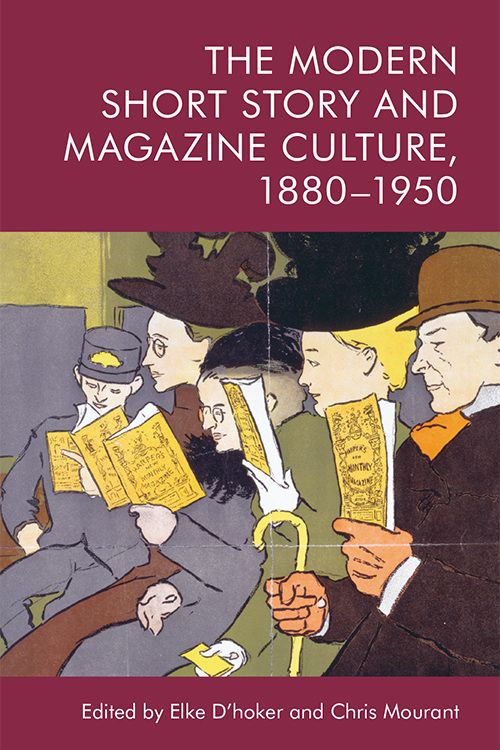 In their seminal essay that charts out the agenda of the New Modernist Studies, Douglas Mao and Rebecca L. Walkowitz highlight the idea of expansion. To conceive of a new understanding of modernism, they contend, we need to expand the conventional narratives surrounding modernism in three dimensions: temporal, spatial, and cultural latitude. Expanding the cultural latitude of modernism invites us to revisit ‘the battle of the brows’, which sparked lively debates on literary tastes, artistic styles, and social class in the early twentieth century. During this period, little magazines that championed avant-garde arts vied for attention with middlebrow and illustrated popular magazines. To that end, periodical studies proves to be a vibrant field in which to examine the complex and dynamic exchange between modernist writing, commercial interest, and popular literature. A growing scholarship has emerged in this field; Elke D’hoker and Chris Mourant’s edited collection, The Modern Short Story and Magazine Culture, 1880-1950, is the latest addition. The collection’s unique contribution lies in its focus on the short story form in the periodical context. The book teases out the complex ways in which editorial philosophies, evolving gender politics, the two world wars, and debates on literary tastes influenced the thematic concerns and artistic expressions of the short story form.

The emergence of the periodical at the turn of the twentieth century coincided with early feminist movements. Many contributors in this collection rightly draw our attention to the gendered dimensions of periodical studies. Whitney Standlee highlights L.T. Meade’s editorship of Atalanta, which aimed at young adult female readers in the late nineteenth century: how she encouraged younger female writers—notably Virginia Woolf among others—and how she promoted ‘a proto-modernist literary aesthetic’ (25). Elke D’hoker investigates The Woman at Home; with a focus on the form of the short story series, she examines the extent to which the magazine promoted professional female role models amidst its concerns for women’s traditional domestic roles. Alice Wood turns our attention to Eve, which targeted wealthy and independent women of the upper-middle class. The conflicting sense of a liberal gender politics clashing with a complacency about class hierarchy is duly exemplified in the short stories in Eve. These chapters brilliantly highlight the context of women’s evolving roles in society; they show us how the emerging female professionals and writers contributed to the development of magazines.

The collection also critically reassesses canonical modernists such as Virginia Woolf. Saskia McCracken examines Woolf’s series in Good Housekeeping and its function as a literary response to Aldous Huxley. Dean Baldwin draws our attention to Woolf’s short stories in Harper’s Bazaar in her later career. Attending to Woolf’s contributions to these supposedly middlebrow magazines, both chapters complicate the demarcation between the brows, suggesting more confluence than clear divergence.

Periodical studies also shows us how disparate modernist figures are connected through shared publication outlets. Annalise Grice, for example, examines Ford Madox Ford’s connection with D.H. Lawrence. Grice suggests that Ford’s liberal politics championed working-class writing during his editorship at The English Review, which provided an apt venue for Lawrence’s early short stories in which he reflected upon his provincial working-class childhood. Yui Kajita offers a fascinating study of Walter de la Mare’s connection with Elizabeth Bowen through their parrot stories in The London Mercury. Kajita’s careful reading shows herein unrecognized inter-textual echoes between de la Mare’s ‘Pretty Poll’ and Bowen’s ‘The Parrots’. In both stories, the parrot’s calls are represented as ambiguous and mysterious ‘tones’ that defy easy interpretation. Kajita reads these stories as resonating with the editor J.C. Squire’s preference for short stories that express moods and atmosphere rather than those driven by plot.

Ann-Marie Einhaus’s chapter on Horizon and Tessa Thorniley’s on The Penguin New Writing are excellent companion pieces, offering insights into the two rival publications’ differing handling of wartime stories. Einhaus shows that Cyril Connolly, editor of Horizon, treated the short story as lightweight pastime reading, as opposed to serious journalistic reports. Therefore, wartime stories were included in Horizon mostly for their topicality to appeal to the mass reader. In contrast, John Lehmann’s editorship in The Penguin New Writing, as Thorniley demonstrates, helped writers to explore the short story as an apposite literary form to express their wartime experience from a variety of perspectives across class and gender. Lehmann observed that different literary sensibilities—documentary realism and psychological analysis—had distinct effects to render wartime experience. His editorship thus oversaw a diverse array of wartime stories and had great impact on subsequent writings on this topic.

With a similar interest in sub-genre, Emma West draws our attention to ‘the artist story’ which became popular in the 1920s, especially in The Royal and The Strand. After World War I, readers longed for gaiety. In the ensuing battle of the brows in the interwar years, anyone with highbrow aspirations became subjects of derision. The figure of the artist—especially Futurists at the time—became representative of the indulgent elitists, potential targets to lampoon. In The Strand, a middlebrow or ‘broad-brow’ magazine, the avant-garde artists bore the brunt of the joke. In The Royal, however, the artists—especially commercial writers—were often celebrated as success stories to which their lower-middle class readers could aspire.

The last section of the collection turns to periodicals of regional interests. Tara McEvoy’s chapter offers an engaging account of the Northern Irish magazine Lagan. Named after the river dissecting Belfast, the magazine was founded with an ambition to champion a distinct Ulster writing for international recognition. McEvoy suggests that the editor John Boyd harboured ‘a vibrant, outward-looking regionalism’ that could ‘act as a springboard for solidarity with international liberal and leftist causes, and artistic movements’ (277). Turning our attention from Northern Ireland to Wales, Daniel Hughes examines Wales magazine, which had Dylan Thomas as its poster boy. Welsh-nationalist in its political persuasion, Wales also engaged with European modernism. To certain extent, both Lagan and Wales highlight the complex exchange between localism and international modernism, offering a reconsideration of the geographical dimension of high modernism.

This volume assembles an impressive array of contributions, with broad thematic concerns, and diverse approaches to the rich terrain of periodical studies. The collection fully demonstrates the various ways in which the periodical as a medium may reshape our understanding of modernism and modernity. Attending to little magazines as well as middlebrow and illustrated popular magazines, it resonates richly with the New Modernist Studies’ agenda of expanding the cultural latitude of high modernism. It is essential reading for researchers interested in modern periodical studies, and the short story form.