This special issue of the Modernist Review aims to bring together approaches to modernism that relate to contemporary times. Much in the way that life as we know it has changed since the spread of Coronavirus, modernism grew out of a time of great change in the early part of the 20th-century. Urmila Seshagiri suggests that contemporary fiction is interested in modernism’s defamiliarizing act and the rewriting of “public and private discourses through the violent, surprising, or thrilling erasure of the habitual and the known.” In commissioning works for this issue, I asked contributors to think about the ways in which the ideals and aesthetics of modernism are still relevant today, and what inspirations and techniques we can use to reflect our own realities. In this vein, Orlaith Darling unpicks the ways in which writers June Caldwell and Lucy Sweeney Byrne borrow from James Joyce’s Ulysses in her article Rewriting Joyce in contemporary Irish women’s short fiction. Caldwell shapes Joycean characteristics to paint a contemporary picture of Dublin in her story ‘Dubstopia’, using her main character as a vehicle to explore the city in a similar way to Joyce’s Leopold Bloom. Darling reads Sweeney Byrne’s story ‘Le Rêve’ in the context of Dubliners, both what it borrows and how it subverts Joyce’s own stories within the collection.  END_OF_DOCUMENT_TOKEN_TO_BE_REPLACED 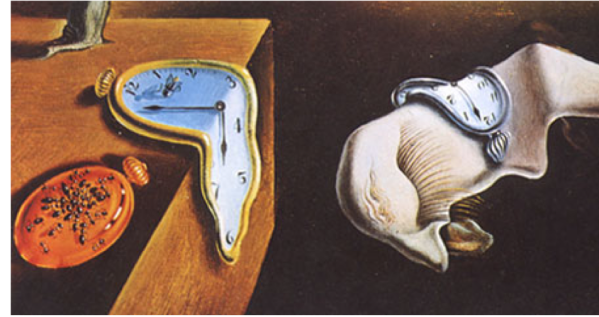 At the start of each new year, E.M. Forster used to write a reflection on the year gone by in his diary. We can only empathise with him as he tried to write about 1920, beginning with the sentence: ‘I may shrink from summarising this sinister year’. This is, as the kids say, a big mood. A century on from Forster’s diary entry, it feels kind of like 2021 hasn’t yet started, and 2020 is still dragging its feet and refusing to exit. After all, it’s a new year but the same pandemic. Forster is onto something, though, in using his writing as a way of processing memories of time gone by, and as our contributors show us in this issue, memory and modernism were of course closely intertwined. Forster might have begun 1921 shrinking away from a sinister year, but it was a great year for modernist writing and art. This year, we celebrate one hundred years since Edith Wharton winning the Pulitzer Prize for The Age of Innocence, Proust publishing The Guermantes Way (if you start now, you might finish it by 2022 in time for the next Temps Perdu centenary), Langston Hughes writing ‘The Negro Speaks of Rivers’, Mondrian straightening up lines on his iconic Composition in Red Blue and Yellow, and Picasso painting his Three Musicians. Maybe you’ve been able to spend some indoor time during this pandemic trying to hash out your own modernist-type masterpiece – whether a seven volume novel or a haiku – for people to celebrate in 2121.  END_OF_DOCUMENT_TOKEN_TO_BE_REPLACED

In 2019, the Modernist Review published a dialogue on the state of Modernist Studies in several instalments, taking as its namesake the title of BAMS’ own conference: Troublesome Modernisms. It began (as so many things do) with a series of tweets in 2018 from Luke Seaber (UCL) who conjectured that ‘current Modernist Studies has something of an academic Ponzi scheme about it’. This sparked a dialogue between he and an independent researcher, Michael Shallcross, about the ‘New Modernist Studies’ and the professional demands of the modern academy. We published responses to this dialogue by Nick Hubble (Brunel University), who believed that ‘it’s time to move…to more democratic conceptions of modernity that lie beyond modernism’, and Emma West (University of Birmingham), whose own encounters with troublesome modernism found her ‘draw[ing] up a pros and cons list for including the word “modernist” in the title of [her] first monograph’. Naomi Milthorpe, Robbie Moore and Eliza Murphy intervened with their own reflections on being Modernism-Adjacent at the University of Tasmania, where ‘the spatial politics of the New Modernist Studies are particularly acute’. Luke and Michael reflected on both of these thoughtful interventions in their own final responses.

END_OF_DOCUMENT_TOKEN_TO_BE_REPLACED 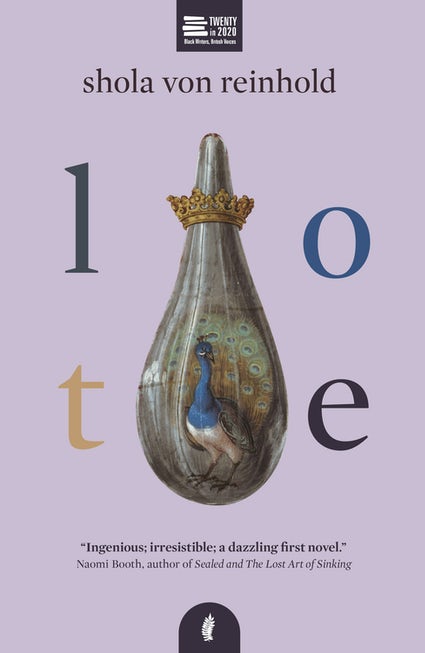 Shola von Reinhold is a Scottish socialite and writer. Shola has been published in the Cambridge Literary Review, The Stockholm Review, was Cove Park’s Scottish Emerging Writer 2018 and recently won a Dewar Award for Literature. Their debut novel LOTE (2020) ‘immerses readers in the pursuit of aesthetics and beauty, while interrogating the removal and obscurement of Black figures from history’. The story follows Mathilda as she traces the path of ‘forgotten’ Black modernist Hermia Druitt from archive to visions to parties to artist residency where secrets and secret societies take her to the depths of a lotus-eating proto-luxury communist cults…

Alys Moody and Stephen J. Ross’s Global Modernists on Modernism: An Anthology aims not only to provide a compendious resource, but, through its collation of self-theorising primary documents,  to ‘go beyond merely gesturing to the existence of modernists around the world, to defend the value of “global modernism” as a critical hermeneutic’ (p. 2).

END_OF_DOCUMENT_TOKEN_TO_BE_REPLACED 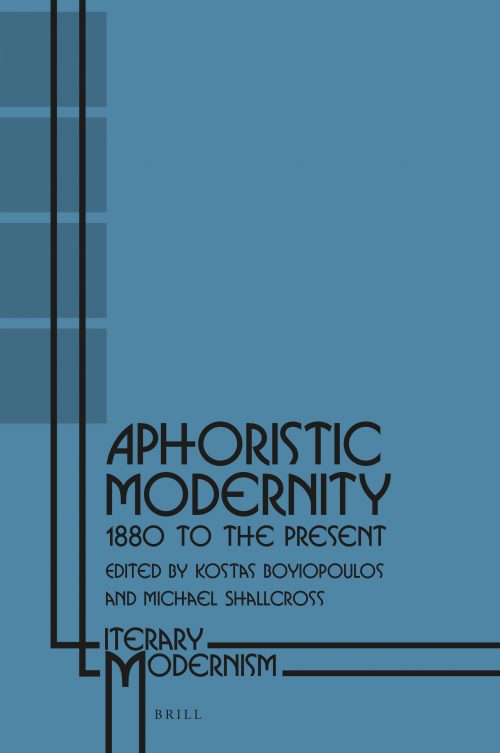 Kostas Boyiopoulos (Durham University) and Michael Shallcross (Independent Researcher) open this collection of essays on aphorisms, epigrams, maxims and fragments with Irving Layton’s ‘Aphs’ (1969), which states: ‘An aphorism / should be / like a burr’ (p. 1). In Layton’s view, an ideal aphorism should stick in the mind, and sting it awake. END_OF_DOCUMENT_TOKEN_TO_BE_REPLACED

In an 1899 journal entry, Wallace Stevens considered the value of ‘art for art’s sake’:

Art for art’s sake is both indiscreet and worthless. It opposes the common run of things by simply existing alone and for its own sake, because the common run of things are all parts of a system […]. Take therefore a few specific examples, such as the sun which is certainly beautiful and mighty enough to withstand the trivial adjective artistic. But its beauty is incidental […] the real use of [a star’s] beauty (which is not their excuse) is that it is a service, a food.[1]

END_OF_DOCUMENT_TOKEN_TO_BE_REPLACED

In one of our most popular recent articles Luke Seaber and Michael Shallcross held an in depth discussion of our namesake, institutional and anchor and bête noire, modernism. This was followed by important interventions by Nick Hubble and Emma West, who, while agreeing in part with the observations made, suggested some rather different points of departure. Naomi Milthorpe, Robbie Moore, and Eliza Murphy, of the University of Tasmania, join this dialogue in their own answer to the question from an ‘adjacent’ perspective. In this third and final installment of this series, Luke and Michael reflect on Emma and Nick’s observations.

END_OF_DOCUMENT_TOKEN_TO_BE_REPLACED 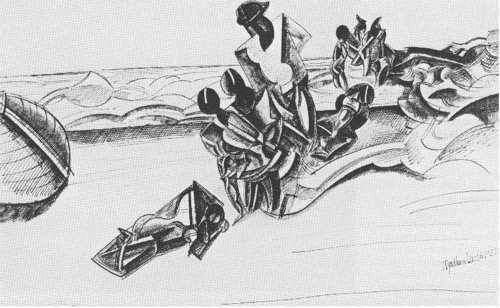 Luke Seaber and Michael Shallcross’s dialogue in issue #10 of the Modernist Review, laid out on a table (Prufrock-style) the various anxieties many scholars are beginning to voice about modernism and the New Modernist Studies. These anxieties are laid out by Seaber and Shallcross in spatial terms. The seemingly welcoming and cosmopolitan expansiveness of the New Modernist Studies is shown to be claustrophobic: its ‘quasi-imperialistic process of assimilation’ (or ‘disciplinary manspreading’) threatening to ‘subsum[e] and dilut[e]’ non-modernists under ‘the lapping tides of expansion’ – even as this imperialistic competition for scarce resources compounds an employment crisis in the university sector, with its ‘institutional model predicated upon contraction.’

END_OF_DOCUMENT_TOKEN_TO_BE_REPLACED

‘It really is time we had a bit more cinema’, Robert Herring writes in the film journal Close Up in 1929, ‘[t]here hasn’t been much cinema yet, although men have been so busy making films for so long, and there will never be unless the magic of it is realised.’[1] The imploration for ‘more’ cinema, despite the fact it had been over three decades since the medium’s first screening in 1895, speaks to the difficult relationship between cinema, its past and its future. Cinema’s early reception and interpretation was accompanied with a curious tension regarding its definition, purpose and cultural status. Caught between silence and sound, between avant-garde art and commercial Hollywood, writing on film was often conflicted. Herring was a film critic and modernist author, writing for the Manchester Guardian and was editor of The London Mercury (1925 – 1927). He was a satellite of the enigmatic POOL group, who published the influential film journal Close Up. His essay ‘A New Cinema, Magic and the Avant Garde’ engages with the manifold anxieties around film’s birth and future whilst also illuminating the magical compulsion that cinema possesses, which he also viewed as its salvation.