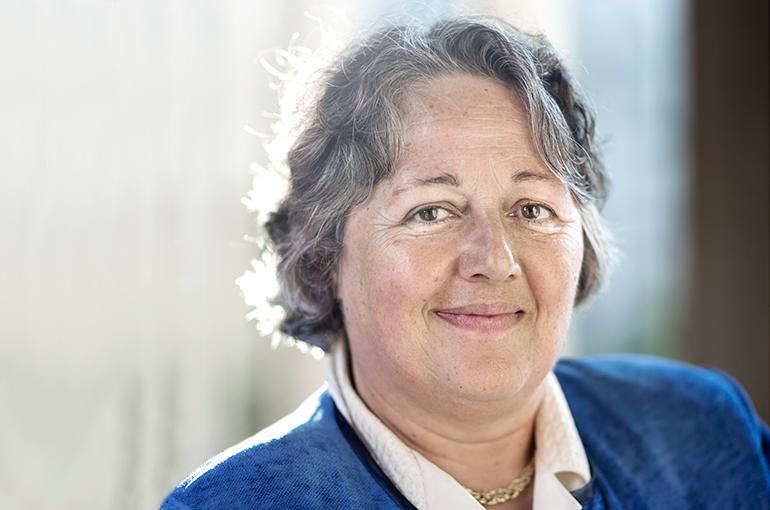 Rosi Braidotti is a philosopher and Distinguished University Professor at Utrecht University and the founding director of the Centre for the Humanities in Utrecht. Her work has been translated into more than 20 languages, and includes the monographs Patterns of Dissonance (1991), Nomadic Subjects (1994), Metamorphoses (2002), Transpositions (2006), and The Posthuman (2013), as well as a number of edited volumes including, with Paul Gilroy, Conflicting Humanities (2016). Although not known as a literary scholar, many students and scholars of comparative literature and contemporary literary theory will recognise her influence on their fields, especially within gender studies, new materialism, and the posthuman. Along with the philosophical influences of Spinoza, Deleuze, and Irigaray, throughout Braidotti’s oeuvre there are multiple appearances by the figure of Virginia Woolf, and in June 2018 Braidotti delivered a keynote lecture at the 28th International Conference on Virginia Woolf at the University of Kent. The Modernist Review recently caught up with her to chat about her love of Virginia, feminist resistance in times of crisis, and why literature matters.

Hi Rosi, thanks for speaking to us today. I want to start by asking you about the most present literary figure in your work – Virginia Woolf. Much of Woolf’s non-fiction bolsters your writing on gender studies, the critical posthumanities, and feminist activism, and her fiction practice plays an important role in your philosophy of affirmation. You recently gave a keynote lecture at the International Conference on Virginia Woolf, and in Metamorphoses you present Woolf’s works as those potent affirmations of life’s virtual possibilities – this is writing as a vital process of life. Why has Woolf had such an impact on your philosophy, and how did your relationship with Woolf begin?

It grew very slowly – my first encounter with Woolf was very much the essays. I studied at the ANU in Canberra in the 1970s, and I think it’s significant to mention that in the Commonwealth colonies she wasn’t part of the canon. We didn’t get The Waves, we got Finnegans Wake. I detest Joyce. I can’t bear the guy. A Portrait of the Artist as a Young Man I can still do business with, but with the rest I think oh, smartass! Anyway, we didn’t get Woolf as part of the English Literature canon but we did get her as part of the feminist canon, so A Room of One’s Own and Three Guineas were my beginning. And then I got to know her little by little as part of my feminist reading, because – I repeat – in the mid-seventies you didn’t encounter her as part of the canon. She wasn’t there. Feminism contributed greatly to making her more canonical than she was, and by now I think her value is simply shining through. Eventually I came to her fiction – I started with Mrs Dalloway and To the Lighthouse, and then of course Orlando, the little bagatelle, the ‘little book’ as she called it. I think her work grows with me – or rather, I grew with her, although she died young. I couldn’t read The Waves when I was forty, and now it’s on my bedside table – I read it like a breviary, like a prayer book.

In your keynote in June you spoke about how perennial and ever-renewing Woolf’s work is for you. Why do you think Woolf keeps drawing you back in?

I have some identification with her pathologies, one of them being graphomania. She was a graphomaniac; she just wrote. And I am at my happiest when I can write. If I have nothing else to write I just copy down the phone book – at least, when we had it – it’s one of my standard jokes about myself. She was a letter writer and diary writer – I have three different versions of the diary with different colour schemes. I mean, what an extraordinary thing it is.

And her sexuality – the complications and the clarity of it. The huge importance of Leonard and his amazing passions which were as much aesthetic as they were real, very few of them actually carnal, but so intense. And her depressions, her struggle to keep afloat – I’m not the depressive type, but keeping afloat in pre-fascist times is something I have known all my life. My identifications are with her perceived weaknesses, which is what critics have always played against her: she’s unstable, she’s the madwoman. I think all of this makes her, for me, absolutely eternal. She is somebody that is completely reborn from her own ashes with each decade of my life. And I think she’s also eminently suited for the internet era. She’s ready to go online, her language can absolutely be digitised immediately – it’s a code. She’s always a step ahead, that’s what I feel. She’s a step ahead in terms of death and of dying, of thinking it through and daring to say enough. I’m working on death and aging at the moment, and she’s even coded that. I don’t know, I’m a bit overwhelmed by the fact that she keeps popping up – oh not you again, isn’t there anybody else that I can think of? But she’s just infinite. It’s that sense of togetherness, that sense of the stream of consciousness, the sense that we are one matter – taxis and molecules and waves and words on papers and ink stains on the apron and Leonard and Vita and the bottles of wine and the morning in Kew Gardens – it’s one. And it’s a tableau that I am so happy in. That’s all I can say – it’s a deep, deep love.

You built your career in philosophy, and you’re known for your work on feminist subjectivity, philosophies of difference, new materialism, and the posthuman rather than as a literary critic. However, like many of your philosophical predecessors, references to literature are woven throughout your works. How important is literature to your philosophy, and what do you think about the relationship between the different disciplines today?

That’s a great question. I actually hesitated between literature and philosophy to the very end. In my days it was possible to do double honours at the ANU – I did English Literature and Philosophy and got a double first so that didn’t help me choose. What really tipped the balance was the fact that Genevieve Lloyd, my supervisor in philosophy, had taught us Michel Foucault as part of the History of Philosophy course. This was like a lightning bolt in my intellectual landscape – I sincerely thought this is incredible, I have to do this. That really pulled me out of the indecision. Literature has remained a constant factor – people say that French philosophy is nothing but literature with a more theoretical slant. As you know, part of the analytic/continental warfare is the dismissal of French philosophy as far too narrative-based, far too aesthetically pleasing. These people are great writers, they do interesting things with language, all things that analytic philosophers don’t do. A proper analytic philosopher writes roughly, badly, and that means that he’s rigorous – and it’s always a ‘he’. So, in a sense choosing French philosophy is also a way of choosing, of course, a type of literary philosophising that is totally central to my thinking.

English Literature as taught in the colonies in the Commonwealth system of Australia in the seventies was a very comprehensive type of education. It was just the great canonical texts – it was a certain idea of what the human is, of what thinking is, of what the academy is for. To say it has a ‘civilising’ role would be to say little – I’m sure you’re perfectly aware of that role. And I am very grateful for it, as much as I can be critical of its limitations in terms of colonialism and the settlement of Australia. For an Italian migrant trying to steer a course between the squattocracy and the aboriginal, this particular idea of what a humanities education is was extremely useful even if it became a target for criticism. Because I did not select Foucault for nothing – this is the Foucault who in 1967 wrote of the end of man and the end of humanism and I knew exactly what he meant having received a perfectly humanistic education myself. We can see how the fatal attraction for a nostalgic idea of humanism – projects such as the Ramsay Centre for Western Civilisation in Australia – can make all of this go wrong. We need a critique of humanism but we also need to know what it is.

In the contemporary political situation – an age of pessimism, distrust, and paranoia, in which universities are becoming institutions of profit rather than knowledge, what can new scholars learn from Woolf and what should we do about it?

Woolf was a major anti-fascist. I think Three Guineas – one of her essays against fascism – needs to be compulsory reading everywhere. The extent of her engagement against fascism was huge – her anti-war pacifism really cost her in a place like the British Empire in the 1930s and 40s. She was absolutely attacked as a coward and a traitor. She was politically engaged with the big causes, the causes of women, but also with the Fabians and socialists. Here is somebody who even had time to take care of the big socio-political issues of the day.

It is crucial to remember that Woolf could not receive a formal education, because women of her generation and even of her class were not admitted to university. Maybe that’s a good place to start, because we always think that the education of women is something that has centuries of solid existence. It’s extremely fragile and it’s very recent. Woolf couldn’t be educated. Simone de Beauvoir couldn’t go to the Grandes écoles, she had to go to the Sorbonne. We’re talking about yesterday here. Of course, being from a big upper-class family, Virginia got a private education, and de Beauvoir had other schools available to her. But maybe remembering the fragility of the apparent ‘success’ of social advancement would make women a little more active in defending what we have in these times when it is under attack from so many forces. The neo-fascists in Italy and in Hungary really want to send women back to the 1950s – they say that if women went back into the home it would solve the problems of unemployment. The success of Atwood’s The Handmaid’s Tale is really indicative: there is the fear that we’re being pushed back. And of course, the history of feminism is always one step forwards and three steps back, and we’re very much in the ‘three steps back’ stage at present because of Trump, xenophobia, populism, new conservatism. So, I think a bit of historical memory is crucial here.

To the people who think that education is for monetarisation and commercial profit, remember that universities are centuries old. Our legal status is charities and we are profoundly for non-profit. You do not know whether the student in front of you in the classroom is the next Virginia Woolf or the next Matteo Salvini. You cannot know. You have to give them both the sense of the possible, and not monetarise every minute of their existence. This is especially important for women who are newcomers into the European university system – people of colour, migrants, particularly Muslim migrants. I think this is a chance to let the flow of things come at you; a great opportunity, maybe, to waste a little time but to gain in the long run in terms of our capacity to dream up possible scenarios. Woolf is a historical indicator but also a signifier of how we should do higher education. It’s about the management of our intensities, and if we don’t do this then there’s no point existing – we might as well become a life-long coaching institution! Higher education is intensity, the shimmering intensity that Virginia Woolf writes so beautifully about.

This site uses Akismet to reduce spam. Learn how your comment data is processed.